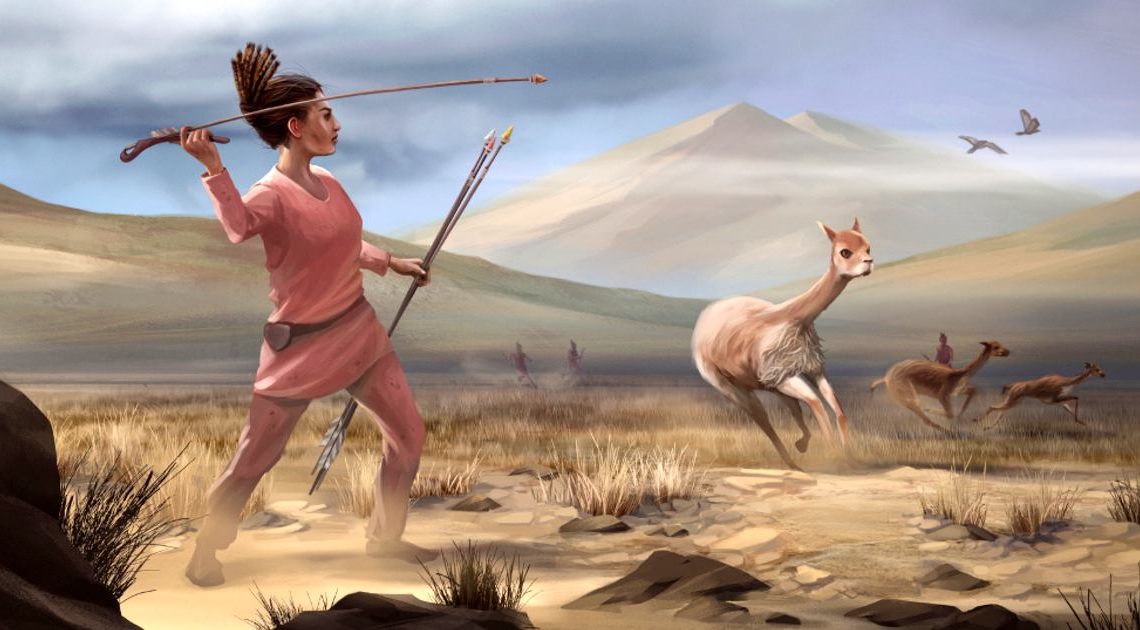 A new study suggests that between 30 to 50 percent of the big-game hunters in the Pleistocene and early Holocene eras in North and South America were women, which overturns some long-held ideas about gender roles in ancient civilizations.

The study, “Female Hunters of the Early Americas,” appeared on November 4 in the journal Science Advances.

For centuries, historians and scientists mostly agreed that when early human groups sought food, the men hunted and the women gathered. But the burial site of a 9,000-year-old female hunter in the Andes Mountains reveals a different story.

A more equitable past?

“We believe that these findings are particularly timely in light of contemporary conversations surrounding gendered labor practices and inequality,” Haas said.

“Labor practices among recent hunter-gatherer societies are highly gendered, which might lead some to believe that sexist inequalities in things like pay or rank are somehow ‘natural’,” he said. “But it’s now clear that sexual division of labor was fundamentally different — likely more equitable — in our species’ deep hunter-gatherer past.”

In 2018, during archaeological excavations at the Wilamaya Patjxa site in Peru, researchers found an early burial site. It contained a hunting toolkit with projectile points and animal-processing tools. The objects that accompany people in death tend to be those that accompanied them in life, researchers said. And an analysis of the bones determined that the hunter was likely female. A subsequent dental protein analysis confirmed this.

The discovery of an early female hunter burial site was surprising. And this led the team to ask whether it was an isolated example, or part of a broader pattern of female hunters.

Statistical analysis shows that somewhere between 30 to 50 percent of hunters in these populations were female, the study said. This level of participation stands in stark contrast to recent hunter-gatherers, and even farming and capitalist societies. There, hunting is a decidedly male activity with low levels of female participation, certainly under 30 percent, Haas explained.

Big-game hunters and division of labor

The researchers determined sex using a recently developed proteomic technique. They also discovered the distinct isotopic signature of meat consumption in the bones. This further supports the conclusion that the Wilamaya Patjxa female was a hunter.

The conditions that early hunter-gatherers lived in, the authors write, “would have favored big-game hunting economies with broad participation from both females and males.”

Backgrounder: what did big-game hunters hunt?

The Pleistocene was a time when humans were still hunter gatherers. It was also a time of great change for our species.

For the most part, we had not yet developed agriculture or settled down into permanent settlements. Our ancestors lived as small groups of hunters who roamed the land.

The Clovis culture was a big-game hunting culture that lived in North and South America about 11,000 years ago. Their name comes from the town of Clovis in New Mexico where their distinctive fluted spear points were first discovered in a gravel pit. These spear points were carved out of stone and fitted to wooden poles. These spear points also helped in the hunt of large animals like mammoths, mastodons, bison, and horses.

The Folsom culture was another big-game hunting culture that lived in North America about 10,000 years ago. Archaeologists often group the Clovis and Folsom cultures together under the name of the Big Game Hunters. These people lived all over North and South America and hunted many different kinds of animals. They used spears, atlatls (spear throwers), bows and arrows, and other weapons to bring down their prey.

These early human beings hunted large game such as mammoths, giant sloths, and saber-toothed cats. In North America, they also hunted seals, walrus, sea lions and whales. They also ate plants and foods such as acorns and nuts that grew on trees.

In North America, we know that humans hunted mammoths and giant sloth bears during the Pleistocene Epoch (which lasted from approximately 2 million years ago to 12 thousand years ago). There is evidence that humans hunted these animals during the Holocene, too. There is also evidence that these animals were also hunted by other predators, such as dire wolves and saber-toothed cats.