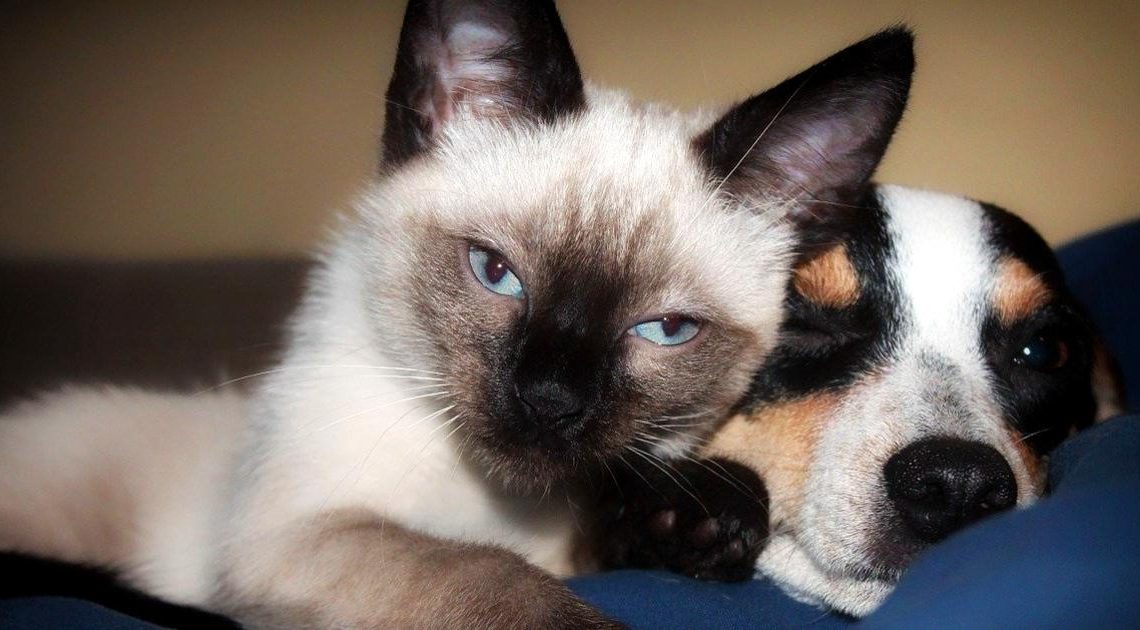 The love-hate feelings between dogs and cats are legendary, especially when looking specifically at cats and dogs living together.

In fact, the topic of cat-dog relationships has recently become increasingly popular among animal scientists. And now a new study by researchers in Italy adds to the literature by looking at how cats and dogs that live under the same roof get along.

The authors of the study, which appears in the journal PLoS ONE, gave questionnaires to 1270 residents of Italy who own both a cat and a dog (or several of either or both).

The study reaffirms many stereotypes about pet personality, but also shows they these two species can easily cohabitate without much conflict.

The results largely compart with prior research. In general, pet owners think of dogs as friendly and cats as neurotic.

The study found that that 85% of the dogs have a friendly relationship with their owner, versus only 49% for cats. And cats are more likely to ignore dogs than vice versa.

Nonetheless, 64% of the “surveyed” dogs and cats play together at least sometimes.

The owners said that their dogs were more friendly than cats to people they knew: 96% of dogs versus only 79% for cats were friendly to familiar humans. The owners also described cats as more likely to be either uninterested in strangers, or scared of them. Dogs were also friendlier to strangers than cats were (51% vs 29%).

Pets under the same roof means eating together, sometimes

Heartwarmingly, after they had finished eating, about a quarter of the cats and dogs in the survey waited close by until their housemate pet also finished eating.

The survey respondents also indicated that their dogs tended to eat from a bowl on the ground, whereas cats’ bowls were generally atop a surface, like a countertop or tabletop.

About 58% of the cats and dogs slept next to each other at least sometimes. In 11% of cases, they always slept side by side, their owners said.

Cats and dogs relationship: fighting, playing, and sometimes ignoring each other

At the same time, 42% of the cats ignored the dog, vs. only 28% in the other direction. Just under 18% of cats and dogs living under the same roof ignored each other. And 10% of the cats hissed at the dog, versus only 2% of dogs growling at the cat. About a third of both cats and dogs engaged in nose-to-nose greetings.

Just over 64% of the cats and dogs living together also played together; 58% chased each other, and 41% fought. Almost two thirds of the pets sometimes playfully “ambush” the other. And almost 44% of cats sometimes played with the dog’s tail.

Stereotypes about dogs and cats: do they hold up?

This study confirms the widely-held belief that dogs are, in general, more extraverted, and cats are more distant. This is perhaps because dogs have been domesticated for much longer than cats. And hat may explain why households with multiple cats often report abnormal cat behavior; they’re still not “used to” the idea of living in a house with humans and other cats. Or at least not as used to this idea as dogs are.

The research also suggests that dog play is more social in nature, with its main purpose being the formation of social bonds. Cat play, on the other hand, more closely resembles hunting behavior, with a clear distinction between prey and predator. Likewise, cats tended to have more of a negative reaction when the dog approached when the cat was being pet by the human.

In terms of possible limitations of this study, the authors point out that people with cats and dogs living together peacefully might be more likely or willing to fill in a questionnaire about their pets’ behaviors.

And in terms of timeliness, this study come at the right moment. The number of cats and dogs sharing the same house is increasing, meaning that the more pet owners know about how to manage these odd couples, the better.

If you’re planning to add a new pet, see this helpful guide on introducing a new cat or dog to your household.

Introducing cats and dogs to each other

Owning a pet and living together can be an absolute joy. As long as you make the right decisions and precautions.

For many people the excitement of having a family pet can be overwhelming. A dog or a cat with their individual quirks and personalities just waiting to be introduced to a new owner. But it’s not an easy decision and they need to be made with care and understanding.

The pet population is growing rapidly. More dogs and cats are now living with their owners than ever before, and these pets also bring joy to their owners. Research shows that owners believe that their pets bring them closer to their families, which can help to alleviate the stresses of modern life. Pet ownership also has a positive impact on mental and physical wellbeing.

What are some tips for dogs and cats living together?

“Dogs and cats living together! Mass hysteria!” according to an oft-cited line from the 1984 classic Ghostbusters.

But it doesn’t have to be that way. With so many dogs and cats sharing a home, it can be a bit tricky for pets to live together happily.

Here’s a few tips on how to keep your pet and your new pup or kitty living in harmony.

• Declutter areas where your pets are comfortable and visit for prolonged periods.

• Put your cat’s food dishes away in a room separate from the rest of the food in the kitchen.

• Ask your vet for suggestions on how to introduce your pets.

• Just sit back and take it all in. A calm and confident demeanor will win your dog over in no time.

• Ignore your dog. This will be difficult at first, but will eventually work to your advantage.

Study: “Cats and dogs: Best friends or deadly enemies? What the owners of cats and dogs living in the same household think about their relationship with people and other pets”
Authors: Laura Menchetti, Silvia Calipari, Chiara Mariti, Angelo Gazzano, and Silvana Diverio
Published in: PLoS ONE
Publication date: August 26, 2020
DOI: https://doi.org/10.1371/journal.pone.0237822
Photo: by joy617 from Pixabay

By Douglas Heingartner
A new study finds that results on a dog personality test tend to change as dogs get older: they become less curious, but also more attached.
Animal psychology

By PsychNewsDaily Staff
A new study finds that tamarins use the “accent” of another monkey species when they enter its territory to help them avoid conflict.
Animal psychology

By PsychNewsDaily Staff
How can you stop your cat from hunting wildlife? A new study shows cats hunt less when their owners give them lots of meat, and play-time.