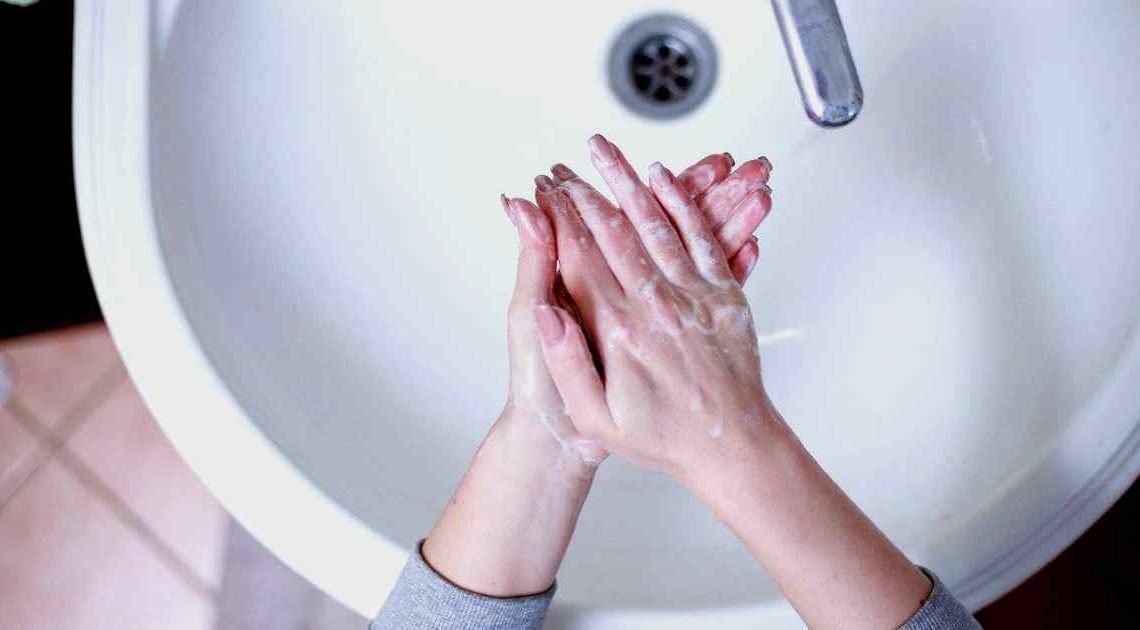 A new study finds that a typical air-based hand dryer leaves more contamination on poorly washed hands than paper towels. A hand dryer can also also spread germs and bacteria onto clothing and other surfaces.

“On average, the levels of contamination were 10-fold higher following jet air dryer use than after paper towel use,” the authors conclude.

The study was published today (March 17) in the journal Infection Control & Hospital Epidemiology.

Prior research has shown that healthcare workers often ignore the recommended handwashing practices. In fact, average adherence is only 40%.

So to better understand hand drying’s impact on hygiene, the researchers, based at the University of Leeds in the UK, conducted an experiment to learn the role of different hand drying methods. They wanted to see which methods were most likely to spread germs from poorly washed hands beyond the restroom.

For the study, volunteers sanitized their hands with 70% alcohol disinfectant, and then dipped them in a nonharmful viral solution. Next, they dried their hands using either using an air-based hand dryer or paper towels. Paper towel drying took an average of 12 seconds, using 3–5 towels. Jet air drying lasted 10 seconds, on average.

During the experiment, volunteers wore an apron to test the contamination of clothing. The subjects then walked along a predetermined path through the hospital. On the way, they touched commonly used surfaces, such as elevator buttons.

The researchers then collected samples from the surfaces that volunteers touched, and also from the aprons. For example, they placed a stethoscope around their neck, leaving it in contact with the apron for seven minutes. They also crossed their arms across their chest for two minutes, and placed them on the arms of a chair for three minutes.

On average, the levels of contamination to surfaces volunteers touched with their hands were ten times higher after hands were dried with an air dryer than with paper towels, the study found.

“Bacteriophage dispersal across hospital surfaces was more frequently detected after hands were dried using a jet air dryer than using paper towels,” the authors write. “On average, the levels of contamination were 10-fold higher following jet air dryer use than after paper towel use.”

And contamination from apron or torso or arms transferred onto surfaces only following jet air dryer use, not paper towel use. The authors suggest this is due to “splattering” when using a jet hand dryer.

Researchers also saw greater microbial transfer to the apron when volunteers used the air dryer. Furthermore, the transfer of microbes to the study participants’ clothing after using the air dryer also contributed to the spread of germs.

“We question the choice of air dryers in healthcare settings”

“Microbes remaining after hand drying can transfer to surfaces via contaminated hands and clothing,” Moura said.

“The study was performed in a healthcare setting,” Moura said, “and has important lessons for health institutions that still have high speed air dryers in restrooms.”

But, she added, “the results are also relevant for public restrooms with high foot traffic.”

Future research on the hand dryer vs paper towel question

Future studies should look at how the method and length of handwashing affect the degree of bacteria transfer and surface contamination.

Contamination of hands during hand drying in a restroom, the authors summarize, can result in microbe dissemination to multiple surfaces in the hospital environment.

“This phenomenon,” they write, “is significantly more likely to occur after hand drying with a jet air dryer as opposed to a paper towel.”

By PsychNewsDaily Staff
About 35% of people who took a new obesity drug called Semaglutide lost more than 20% of their body weight, with 75% losing more than 10%.
Medical news

New study: COVID-19 has led to a 53% decrease in heart surgery in the US

By PsychNewsDaily Staff
COVID-19 has resulted in a major decline in the amount of heart surgery in the US, as well as unexplained increase in deaths.